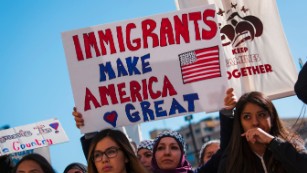 Immigrants are the people who migrate to a new country from their home country, either temporarily or permanently. They may not be citizens or natives of the country where they settle, but they become naturalized citizens and permanent residents once they have settled in. There are many reasons why immigrants choose to move to a new country. Read on to learn about different types of immigrants and their unique stories. Also, find out what happens when an immigrant becomes a citizen.

Immigrants contribute billions of dollars to the U.S. economy each year, which is an enormous amount. They fill low-wage jobs, bolster the labor force, stimulate investment, and revitalize communities that were once dying. Social scientists also note that immigrants contribute far more to the economy than they take in.

Immigrants are people who leave their home country to seek better living conditions. These individuals deserve to be treated with respect and dignity. They may be looking for a better job or an education. They may also be trying to get back together with their families. Immigrants deserve respect for their choices, and the rights and freedoms they enjoy in their new country.

The Trump administration’s “public charge” rule makes it harder for immigrants to gain lawful residency. This new rule also makes it more difficult for people with modest means to receive public benefits. This will make it even more difficult for immigrant families to gain lawful residency in the United States. Moreover, it will create a fear among immigrant families to apply for public benefits. Public benefits help low-income families make ends meet and access health care.

There are many ways to become a lawful permanent resident in the U.S. While not every lawful immigrant chooses to pursue citizenship, many do. In fiscal year 2019, about 800,000 immigrants applied for naturalization. Although the number has increased in recent years, it remains below the one million applications made in 2007.

Immigration has long been a topic of heated political debate in the United States. Unfortunately, Congress has not been able to agree on a comprehensive immigration reform bill. As a result, major policy decisions have been passed to the executive branch, the judicial branch, and state and local governments. However, President Donald Trump’s recent policy actions have brought immigration to the forefront.

Aside from legal immigrants, refugees are a subcategory of immigrants. Refugees are people who have fled their home countries due to persecution or fear. They come to the United States by applying for refugee status, and then if they meet the requirements, they may apply for legal residency.