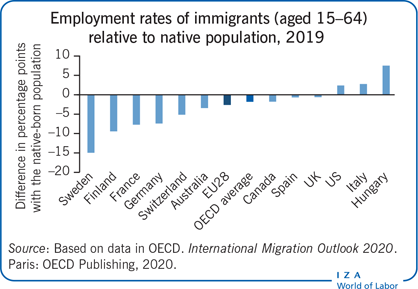 As of 2015, the United States had approximately 44.9 million immigrants – or about 14 percent of the entire population. Among those who are noncitizens, 6 in 10 were lawfully present immigrants while over four in ten were undocumented immigrants. The most common origins of immigrants include Mexico, China, the Philippines, and El Salvador. Besides immigrants, there are a large number of native-born Americans with immigrant parents, which explains why nearly half of all immigrants are naturalized citizens.

Immigrants provide a wealth of services to the United States economy. They contribute billions of dollars in taxes each year and fill low-wage jobs. This helps keep the country’s economy competitive and stimulates job creation and investment in the U.S. Immigrants also help revitalize communities that have been in decline.

While the term “immigrant” is used in many countries, the term is not universally used. It is more common in North America, where it is used to refer to people who are not native to the country they are living in. Other common terms for immigrants include foreign born and migrants. Many national statistical agencies base their estimates of migrant populations on people who state they were born in a foreign country or hold citizenship in that country.

Federal and state efforts to extend health care coverage to immigrants have been a focus of recent federal action. In particular, federal legislation has been introduced to remove the five-year waiting period for health coverage for immigrants. Nevertheless, the passage of these bills in Congress remains uncertain. Meanwhile, state-level action is taking place to make state-funded coverage available to low-income individuals regardless of immigration status.

Recent studies have shown that legalization can improve immigrants’ language skills, education, health, and productivity. This means that legalization is beneficial for immigrants and their families as a whole. In Germany, for instance, immigration reform laws have improved language and educational skills of immigrant women and resulted in greater labor force attachment. Another study showed that a faster path to citizenship had improved language and labor force attachment among women.

Besides the immigrants with legal status, the United States also accepts refugees and asylum seekers who are seeking asylum in the country where they are currently living. Unlike immigrants with temporary residency, refugees don’t need to apply for a visa to enter the country. Many immigrants become lawful permanent residents and citizens after being screened and approved by immigration authorities.

In addition to the labor market, immigrants also bring economic benefits to the United States. Those immigrants who are able to find important jobs contribute to the overall labor market, create a demand for goods and services, and support children. The United States has one of the highest rates of foreign-born residents in the world, but that doesn’t include special administrative regions and overseas departments.

While the United States has a legal right to control immigration and enforce our internationally recognized borders, the ACLU believes that immigration control must be conducted in a fair, humane, and respectful manner. The term “illegal immigrant” (also known as a green card) is a misnomer, based on the common belief that immigrants in the United States have no legal status.